There were three things we wanted to accomplish today and we did all three of them. We wanted to visit the sites of PK17 and the Golf-3-12 position across from the old runway at Quang Tri and we wanted to check into our hotel near Dong Ha. We started off with high hopes and a new driver. This guy appeared to have a better command of English than his predecessors and that proved to be the case as the day went on.

At his point this blog must sound like a broken record. We came very close to the site at PK17 but everything has changed so much that it is impossible to verify it. According to the GPS we came within a hundred meters. The landscape has changed. Whole new settlements have grown up where none existed before. So, we took a picture of Jim close to the spot and checked PK17 off our list. 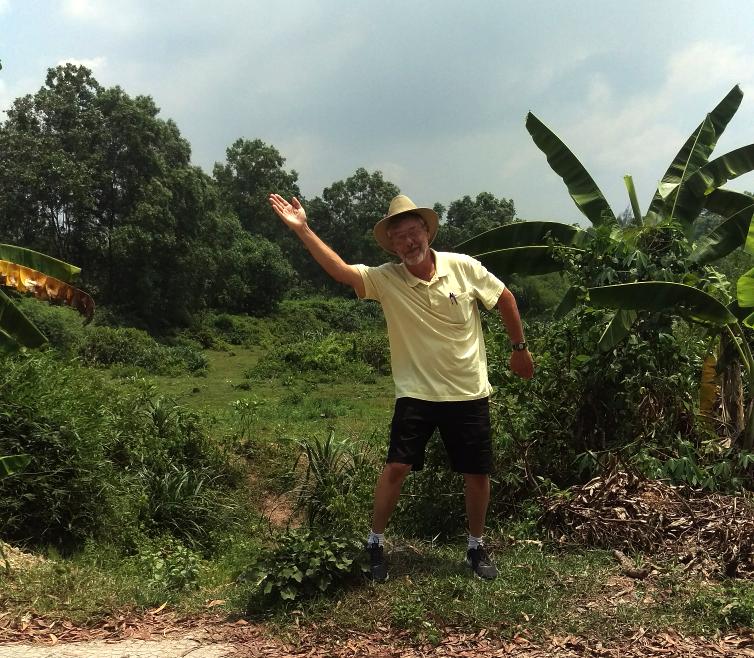 As we headed up to Quang Tri, we asked our driver if the site of Camp Evans was near the highway and the next thing we knew he had turned off Highway 1 and onto a side road. He drove about a quarter of a mile, stopped, and informed us that we were on the site of Camp Evans. We thanked him and he headed off back up Highway 1 towards Dong Ha. Before we got to Dong Ha he made two other stops. I’m not sure whether there was something he wanted us to see or if he just wanted a smoke break. The first place was the bombed out remains of a church on the side of the road. It had really been shot up at one time. We poked around a little, not knowing what we were looking at but on the way back to the car I noticed some writing on the back side of a sign in English. The sign said something to the effect that this church was “the site where the Army held off the Southern Army and the United States forces as they tried to recapture Dong Ha”. The second place is a building that he informed us was a high school but it appears to have suffered the same fate as the church during the same battle. We showed no interest and he didn’t stop.

We drove to the middle of Dong Ha and he took us to the district where all the high-rise hotels were but we told him our hotel was out at the beach. After a quick call to his brother, who lives in Dong Ha, we proceeded to the beach. I can see why they call Vietnam the ricebowl of the orient because we drove through mile after mile of rice paddies to reach the shore. Stopping to let stray water buffalo and cattle wander off the road in front of us reminded me a lot of the Vietnam I remember from the 60’s. We eventually found the hotel.

Have you ever gone some place and instantly determined that you didn’t like it? Both of us got the same reaction when we got to our hotel. At first they couldn’t find my reservation and tried to book us into the same room. When we protested they looked again and only after I found my reservation on my phone was the mystery solved. Jim had booked his room through Trip Advisor and I had booked mine through Travelocity. You would think it didn’t matter but somehow it did. When we got to the rooms we found them stifling (as with many European hotels, Vietnamese hotels do not have any power in the room until you insert your key into a gizmo by the door), and they reeked of mildew. They were also laid out in a very bizarre way. The most bizarre part of the room was the fact that the toilet was in the shower. I didn’t take a shower that night because I knew that by taking a shower the floor would become treacherous and I didn’t want to chance slipping and falling during the middle of the night on a wet floor. I took my shower the next morning and it confirmed my suspicions.

We wandered down to the beach and sat by a shanty by the road. Momentarily four cans of warm Saigon Beer and a small bucket of ice appeared at our table. The beach was very long and it was beautiful but it was barren and deserted. We drank the beer and headed back to the rooms. By the middle of breakfast the next morning, after enduring the noise of a wedding outside our rooms the night before, we had made our decision. We abandoned the idea of visiting the sites along old Route 9 that we had identified (i.e., Khe Sanh, the Rockpile, and Camp Carroll) and we called for a car to take us to the train station in Dong Ha. I got us rooms back at the hotel we liked the best of all the ones we had stayed at in Danang and we bought tickets for the 9:18 train headed in the direction of Saigon. The fare was about $5.25 for the 4-hour trip. 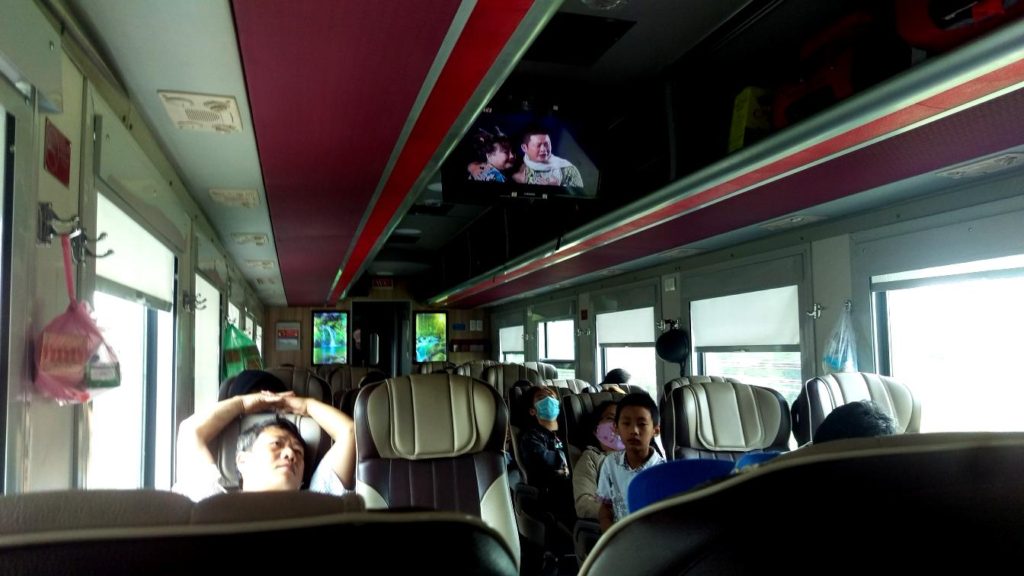 The interior of the car

The trip to Danang was about four hours long. Our car was air-conditioned and the seats were comfortable enough 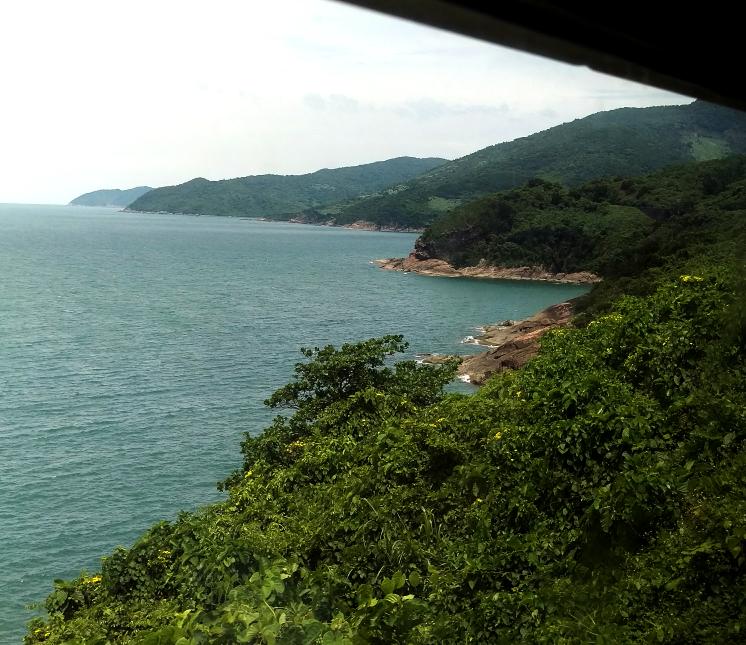