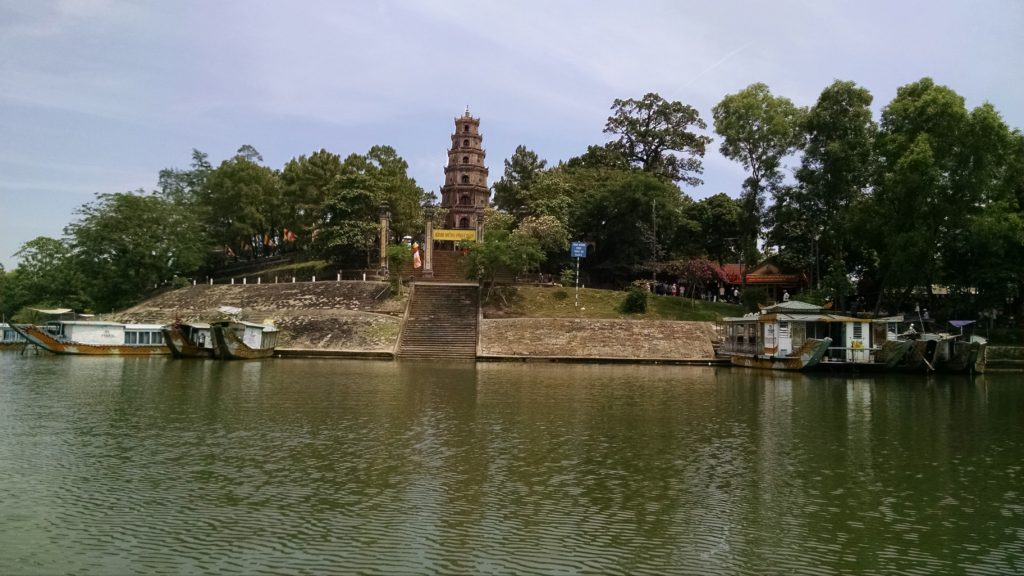 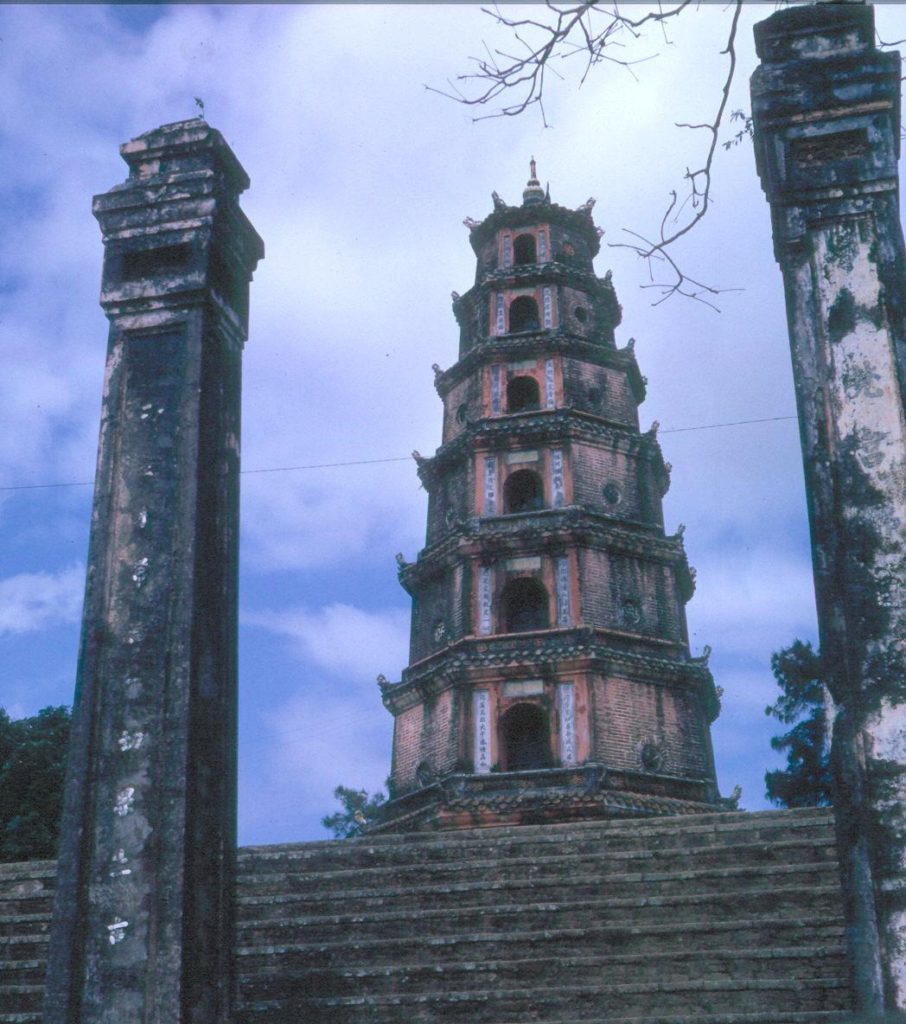 The plan for today was to stay in Hue and catch some of the city. We asked at the front desk about the boat ride up the river to the Thien Mu pagoda just west of Hue. The clerk told us not to worry and she arranged for a cab to pick us up at the hotel, deliver us to the boat, and to give the boat owner instructions to take us to the pagoda and than back to the Citadel in Hue. The boat ride was short but interesting. Of course we were given the opportunity to buy from a wide selection of trinkets and trash the owner had on board and both of us made a small purchase. 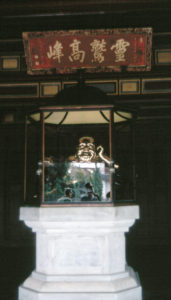 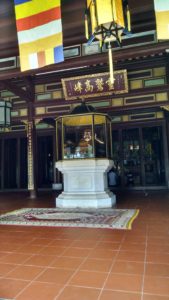 The pagoda was just as I remembered it from 1966 but I don’t remember the long flights of stairs from the river up to the pagoda grounds. We looked around and got some pictures. The grounds were particularly busy today because we think we were told that today is Buddha’s birthday (it’s kind of hard to get the full gist sometimes). 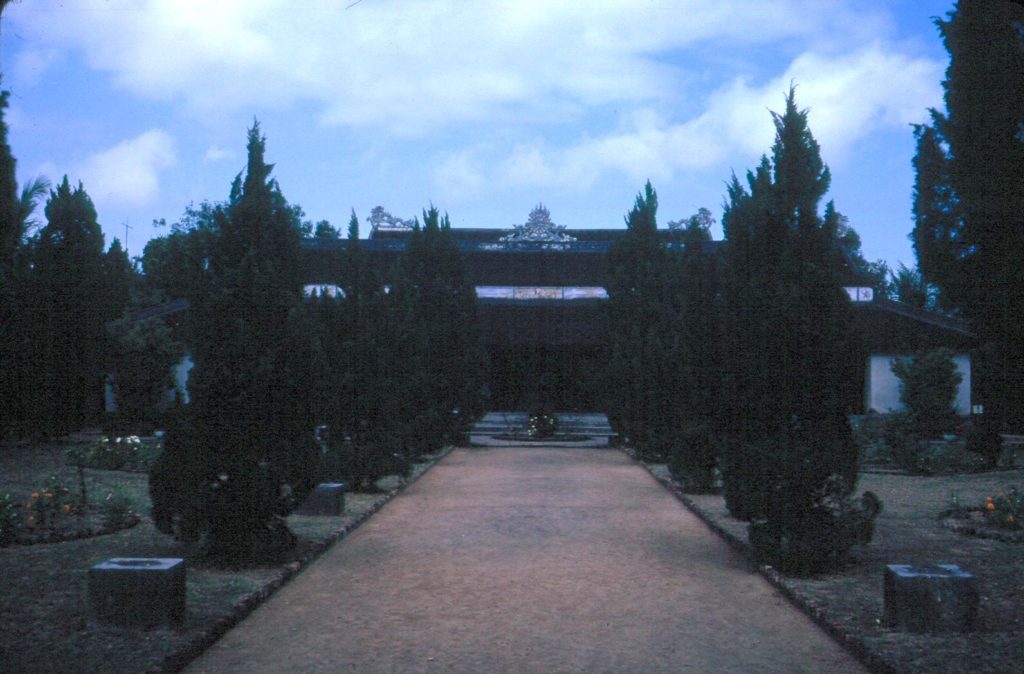 From the pagoda we went back down river to the Citadel and the Forbidden City. on the way down the river in this dilapidated boat I kind of felt like a cross between Charlie Allnut in “The African Queen” and the narrator in the book “Into the Heart of Darkness”. I was on the wrong continent to be sure but it felt like that anyway.

We found our way into the Citadel and wandered around a little. I showed a few people a photo I had taken there in 1966 in hopes of finding the same site but no one seemed to have a clue if it still existed or, if it did, where it may be. Once again the heat and humidity just got to be too oppressive and we made our way out of the walled city to a cab and a ride back to a restaurant we had found the other day that was near our hotel. 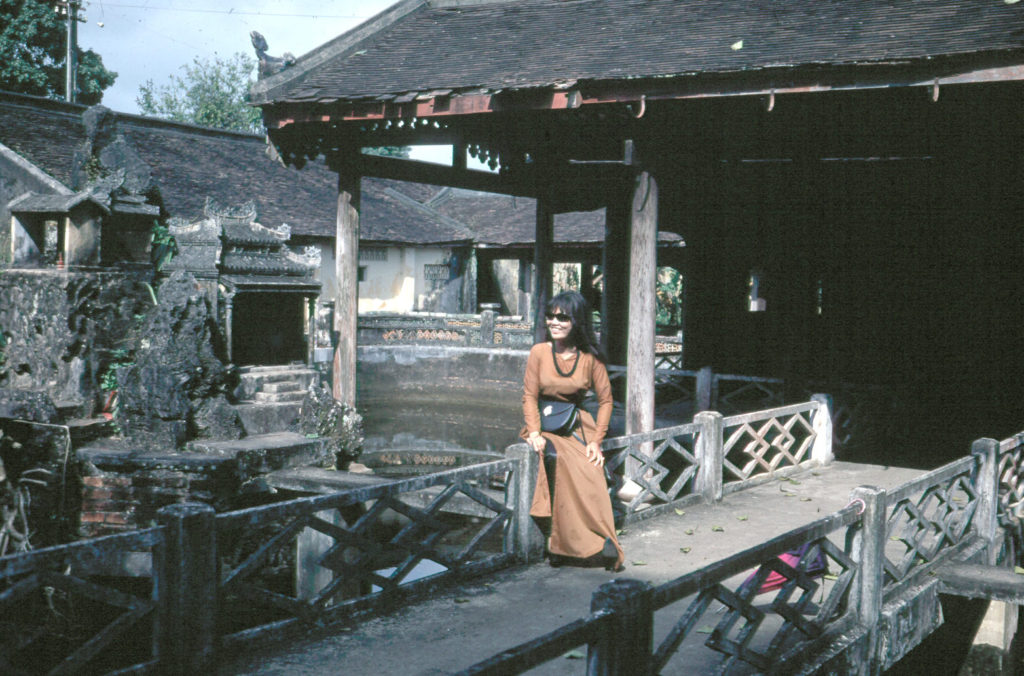 On the way out of the Citadel I turned around and “bingo” I recognized the spot. I got Jim to pose for me and the result is below. One picture in from 1966 and the other is today’s picture. 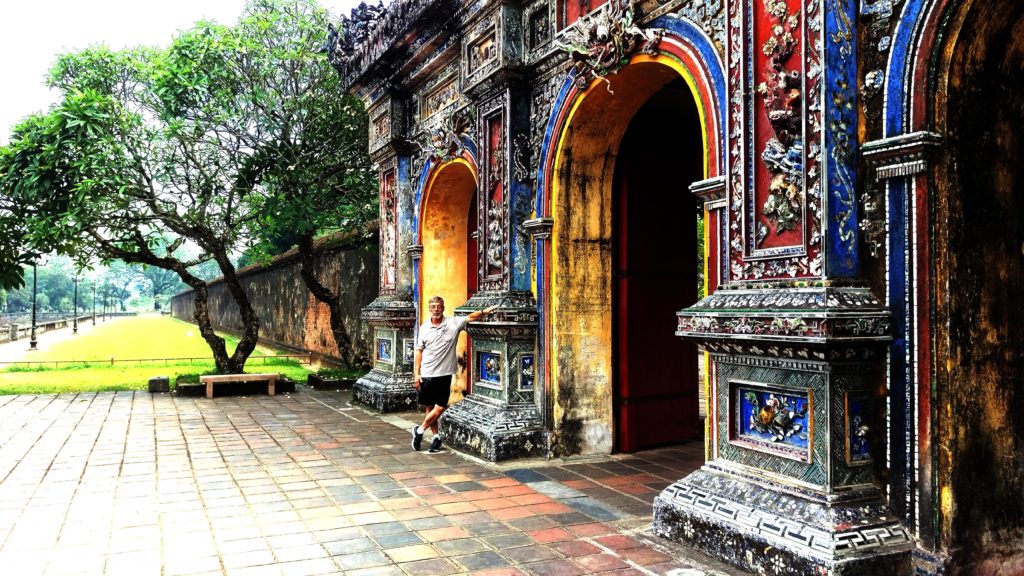 We were greeted at the restaurant like returning kinfolk, which indicates to me that we tipped too well the last time we were here. The meal was good and the shade and the breeze from the fan made it very comfortable. “It’s a dry heat” may be a cliche in Phoenix but it is true that heat without humidity is much more tolerable that heat with humidity.

What we ordered was something called “Hue Nem Lui”. These Vietnamese pork skewers are made of ground pork that is shaped around stalks of lemongrass and cooked on a chargrill, which releases a smoky aroma that flavours the meat beautifully. They are served with rice paper and fresh vegetables. The idea is to wrap some of the vegetables in the paper around the meat and eat it like a corn dog off the stick after dipping it in satay (peanut sauce). I’ve got to see if I can find them in Phoenix somewhere.

Jim went off in search of tonic water so he could fix a proper gin and tonic and I went back to the hotel and made arrangements for a massage. It is strange that most bars here can serve gin and tonic but it is almost impossible to find a can of tonic water. Jim poked around and eventually found a reliable source. My massage was in the hotel’s “sister” hotel around the corner. I got there a few minutes early and was informed that the therapist was late. It’s not a big deal but I had left my phone and my tablet in my room so I had no electronic toys to occupy myself while I waited. Eventually she arrived and I got a relatively good massage for the whopping sum of $16.45 (no tipping allowed). It was dark and it had started to rain by the time my massage was finished. I walked through the alleys back to my hotel in a light drizzle and it felt good..

We had a good dinner and capped it off with a gin and tonic from Jim’s stash before we headed off to our rooms. All in all it was a good day. Tomorrow we head to Dong Ha and the DMZ.