There is some video shot by Larry Hilton in Phu Bai posted here.

The Battery initially consisted of six 155mm Self-Propelled Guns (M53s). The firing tables for these weapons were never converted to metric as the other US weapons had been because they were considered to be obsolete. The Marine Corps retained these weapons but eventually replaced all the 155mm Guns with 175mm Guns in 1969. At times the Battery was augmented with Self-Propelled 8" Howitzers (M55s) that used the same carriage and looked very similar. They both used components of the M47 Patton tank. The engine was mounted in the front and drove through a front-drive sprocket. They are often confused and mislabeled in photographs. The main distinguishing factor between the two is the length of the barrel, or tube. The Gun was a high-velocity, low trajectory weapon while the Howitzer was a shorter range weapon but was amazingly accurate. Adding to the confusion was the fact that the Army had reconfigured all its M53 Guns to M55 Howitzers and the two designations (M53 and M55) were used interchangeably in a lot of Army documentation and history. Also, the fact that the USMC often fielded the weapons together in combined batteries led to some confusion among observers and reporters. The battery received its 175mm Guns in Feb69.
Slideshow
View 18 photos

Pictures from Bob Simington's return in 2011 and from Bob's and James Kiser's trip in 2017. On both trips Bob brought a portable GPS unit with him that had all the Battery locations programmed into it. During the years between the trips Bob and Jim discovered a discrepancy between the military and civilian coordinate systems that had led to a ~500 meter error in the locations derived by simply converting the coordinates. They devised a way to correct the error so the 2017 locations are closer to the original locations than the 2011 locations. The pictures of the Phu Bai position are taken within 50 meters of each other (but 50 years apart). The street scene in Hue is of the same street at about the same location but looking from different directions. Read Bob's trip blogs for more details.
Slideshow
View 20 photos

The Battery was deployed from 29 Palms in California in February as part of 1st Field Artillery Group (FAG). While at sea aboard the USS Ogden, 1st FAG Hdqtrs received orders to drop the 3rd 8" Howitzer Battery at Chu Lai, drop 1st Guns at Danang, and then to proceed to Okinowa.
Slideshow
View 14 photos

Here are pictures of some of the people who served in 1st Guns in Vietnam.
Slideshow
View 29 photos

The Battery moved from the Danang TAOR to the Hue/Phu Bai TAOR in June of 1966. The first Battery Center in that area was located in Gia Le. It stayed there initially for three months, when it moved to the Phu Bai enclave in September 1966. Platoons of Guns were occasionally deployed to the Gia Le area over the next two years to support various 3rd MARDIV operations. The sites were described variously as "Gia Le area", "3rd Engineer Compound", and "Camp Eagle". Notice how built up the place gets between our first time there and the later deployments.
View 2 albums

The Battery moved to this position on the southern border of the Phu Bai compound in September of 1966 and remained headquartered there for over two years. Many of the pictures on this site were taken from the Counter Mortar tower shown in this album.
Slideshow
View 23 photos

On 30Jan67 a platoon of 8" Howitzers under the control of 1st Guns was deployed to a position adjacent to an ARVN compound 17 kilometers north of Hue (PK-17) in support of Operations Chinook and Bighorn. On 6Apr67 the position was attacked resulting in 2 members of the battery being killed (KIA), 8 Marines wounded (WIA), and one of the 8" Howitzers being destroyed as the result of a direct hit by an enemy mortar. The Army 40mm M42 gun crew suffered 2 KIA in the attack as well. The platoon remained there until 21Apr67 when it reverted back to 3rd 8" Howitzer Battery control and moved to a position in the Shawnee area of operation (AO).
Slideshow
View 16 photos

The Battery was called on several times to provide coverage for operations that took place in or near the Ashau Valley west of Phu Bai. Our positions there were usually along route 547 near the Minh Mang Royal tombs. They were accessible via a ferry crossing over the Perfume River and they were very primitive. When the Army took over the region in 1969 they located a large fire support base (FSB Birmingham) there that included a landing strip and a Brigade of soldiers.
Slideshow
View 16 photos

These pictures were all taken in 1966 and 1967. Go to the Then and Now page to see what some of these places looked like in 2011.
Slideshow
View 13 photos

The Fire Direction Control (FDC) was the center of communication between the battery, the outside world, and the gun crews. All fire missions were received in the FDC and the firing calculations were made there and then communicated to the guns in order for them to hit the target. 1st Guns FDC sections worked in tents, fully-outfitted vans, and timber bunkers, during their deployment to Vietnam depending on their current location and resources available at the time.
Slideshow
View 29 photos 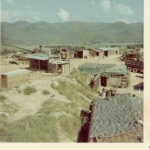 The battery disembarked the USS Ogden in Danang on 3Mar66 after dropping the 3rd 8" Battery in Chu Lai. Almost immediately after the battery was laid in its first position it began swapping Guns with the 1st 8" Battery. This weapon swapping would continue for the remainder of the unit's time in Vietnam. The first position was located close to a Grunt unit (probably 9th Marines). The site had vegetation on it and we were housed in tents. On 27Mar66 the battery moved to its second location, which had been the location of F/2/12. We were housed in hard-backs when we moved to the F Battery location and we began construction of a timber bunker while we were there. We remained in this location until Jun66.
Slideshow
View 10 photos