Mr. Teng came to pick us up as arranged at 10:00. Jim and I had decided that we would have a better chance of accomplishing our goals if we sat down with him in the hotel before we left and went over the plan. Jim had some details of the sites on his phone and I brought my PC down to the lobby to give him an overview of our route. Jim had also used Google Maps to calculate the distance between sites. We also explained to him that we did not want to see any other sites and we did not want to stop anywhere on the way. None of the sites were more than 10 kilometers from where we were sitting at the time and all of them were simply stops on the side of the road. We set off with high hopes.

Our first target was a site near a village called Gia Le. It had been the site of our third location in Vietnam. We moved there on 6Jun66 from Danang. My personal goal for today was to replicate the view from the site showing a panoramic view looking out towards the sea.

When we moved there the site was barren except for a lot of graves, some very simple and some very elaborate, scattered all around. The Google Earth image shows some sort of a campus on the site. The campus includes what appears to be an olympic-sized swimming pool and a pond that is formed by a dam. 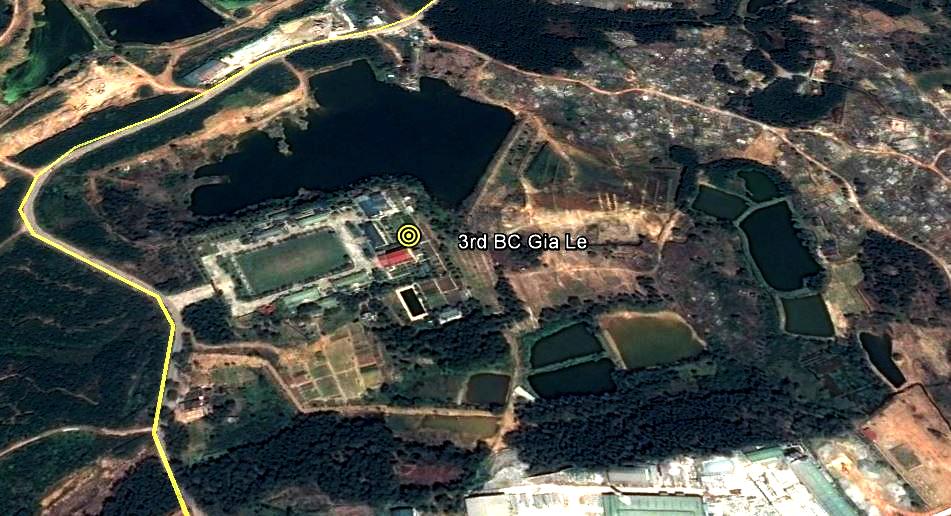 When we got there we found that the site is wooded and is now occupied by a Vietnamese Army barracks. Teng didn’t want to stop but I got him to stop and I got out to take a picture. For those who were there, this gate is located just about where the Vietnamese barbershop was located near the entrance to our compound. Teng was very nervous about me running around a military site with a camera but he came along with me and chatted up the guard who came out to meet me and tell me that photos were not allowed. We eventually got back into the car and headed off to the next site. 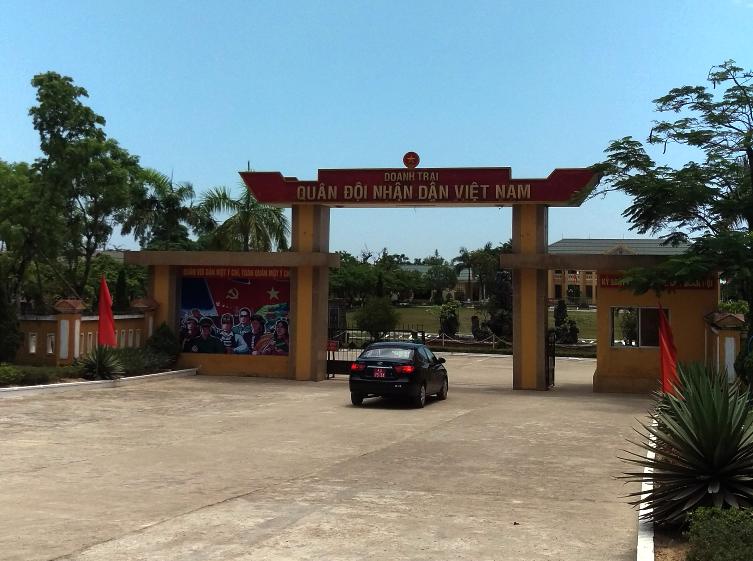 We continued on our journey. The next site was the location of our fourth location in Vietnam on the southern perimeter of the Phu Bai enclave. I had visited this location on my 2011 trip but I learned soon after I returned that my plot of the site was off by about a half a kilometer due to discrepencies in the map coordinate systems. We headed off to the site with confidence since the new plot put the site directly on the side of the road. When we got to a big intersection Jim informed Teng that we wanted him to drive exactly 6.6 KM and then stop. Teng was still totally clueless as to what we were doing but he drove off. As I sensed that we were getting close I powered up the GPS in my bag and watched us draw closer and closer to the target. Teng would have driven past the site (despite all we had said to him, he still thought we wanted to go to the airport) but we told him to stop. It was kind of funny because he stopped the car and Jim and I both jumped out of the car. I began walking down the side of the road watching my GPS display and Jim took off looking for anything that looked similar to the picture of a grave that Larry Hilton sent me a few weeks ago that he said was out in front of our position. I am now confident that we located the position and I took some pictures to document it. The pictres below are taken from less than 50 feet apart but more than 50 years apart. 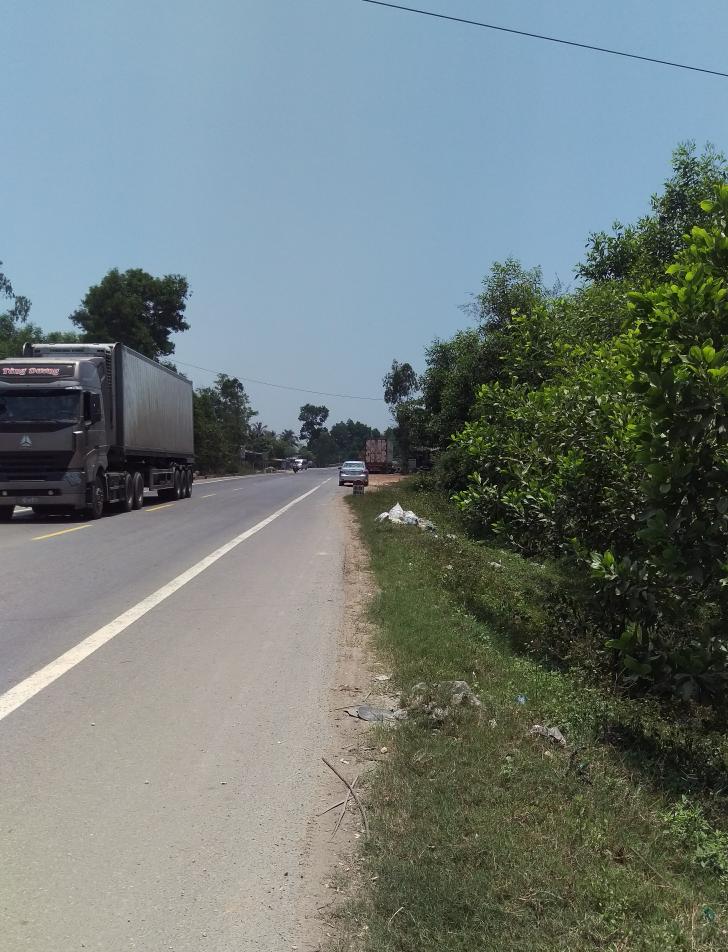 After I finished taking the picture I walked back to the car and found Teng sitting in a shed with a local guy drinking tea. He offered me a cold bottle of water as I arrived. The proprietor seemed to be curious about what we were doing so I cranked up my Kindle and began showing him pictures of the site taken in 1966 and 1967. He immediately understood what he was looking at and began to talk with Teng. He pointed out the river on one of the pictures and explained to us that you couldn’t see it now because of the trees. He also told us that this was an “Army Base” during the American War and it dawned on him that Jim and I had been there during the war. I am not certain, but I think his conversation finally made Teng understand what we were doing. Up until then he had been clueless. I showed him the picture of the grave that Larry had sent me 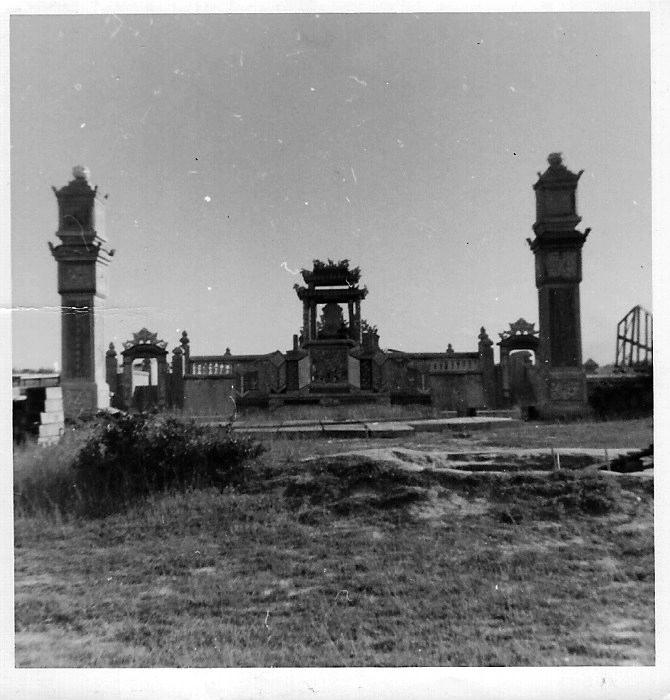 and he identified it as a “Nguyen Family grave” and said there was one similar to it about a kilometer down the road but we didn’t pursue it. Next we were off to a position where we had located two guns during the summer of 1967. I asked Teng to drive us to the Minh Mang tomb. We had no intention of going to the actual tombs but the site we wanted to visit was a few kilometers beyond the tombs on the same road. We got to the tombs and Jim gave Teng the exact distance to the site in kilometers. We hadn’t gone far before we realized that Teng had no idea what Jim was talking about. He didn’t understand what an odometer was and, in fact, he had the display on his car set so the odometer was hidden. It wasn’t a big deal because I knew the site was located just off the road and I had it programmed into my GPS. When we got there we found, you guessed it, a military facility. Also, as in the other cases, it was very wooded so it was impossible to see the horizon.

All I can figure is that we had a knack for picking spots that were prime real estate because Jim and I found several of our positions had been converted into Vietnamese military facilities. All in all it was a good day. We located all three spots I was loking for. We got verbal agreement that the place we found had been a US military site. We headed back to Hue and had Teng drop us off at a restaurant close to our hotel that was recommended to us. The food was great and the beer was cold.