We arrived in Danang last night after a long flight to Inchon and then on to Danang. Jim’s idea of flying business class turned out to be a good one. Our seats were very spacious and the food was good. We certainly arrived in better shape than we would have if we had traveled coach. This morning we packed up the GPS, some old photographs and some maps and we took our Vietnamese driver on an adventure. It is very frustrating to know exactly where you want to go and to try to get a driver, whose command of English is tenuous at best, to follow your directions. I won’t even get in to what it is like to ride in a car over here. I did enough of that in the blog from my last trip. Anyway, after some twists and turns we managed to get within a few hundred feet of our first battery position.

During our first reunion in 2014 Jim spoke about our “first” position in Danang and our “second” position. John, Henry, and I told him he was crazy because we never remembered any “second” position. Bert settled the argument by agreeing with Jim that we had been in one position for a very short time (it turned out to be less than three weeks) and then we moved to a second position, which we occupied until June 1966, when we moved up to Gia Le by Rough Rider convoy up Route 1 and over the Hai Van Pass. I went back to my pictures after he brought it up and found clear evidence that we had, in fact, been in two different but relatively close positions. The problem with finding these places is that much has happened to change their appearance in the intervening 50 years. Our fist position was a nice grassy area that even had some trees on it. The place is now surrounded by a light industrial park and the exact location of what had been our position is now a dump or a landfill. Anyway we got pretty close as the photo below shows.

My first attempt back in 2011 to locate the second battery location was not very successful for a few reasons. First, my GPS location was off by about 500 meters due to a discrepancy I found between the military grid system and the modern grid system used by modern GPSs. I created a work-around that allowed us to use the coordinates from the old records and correct them using graphic overlays. GPS technology has also improved and now we are able to use both the American and the Russian GPS satellite systems to get very precise locations. Despite that, the site of our second position had been part of a quarry and is now occupied by a Cement/Sand and Gravel company and any landmarks have been obliterated. We got within 500 feet of the Battery Center but we couldn’t document it because there are no landmarks to use to document it. You’ll just have to take our word for it.

As for the third location I planned to visit today, the site of the last Battery Center we had in Vietnam in 1970, it is in the center of a very densely populated area and we didn’t even attempt to locate it. We did come within 0.28 miles of it though according to the GPS.

I was amazed in 2011 by how much this place had changed. In the 1960’s this area was a very rural area near a big town (Danang). Now Danang has changed even more to  become a bona fide “metroplex” that extends for miles in all directions from a glitzy little city full of high-rise apartment buildings and condo’s. It was very obvious as the plane approached the city last night as to how big it had grown.

But the people are friendly. The prices are cheap. It cost me about $10 today for two beers, a salad and a bowl of noodle soup. The weather has been good with relatively mild temps (~82°) but very high humidity. For some reason I have not been bothered by jet lag and my digestive system is cooperating. Tomorrow we head south to visit Hoi An and then to find three locations down there (Hill 55, Hill 65, and the An Hoa Combat base). 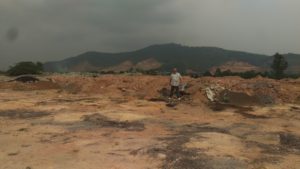 May 1967 was not a very eventful month in the life of the 1st Guns battery. The battery was located on the south side of the Phu Bai compound, which was home to the 3rd Marine Division headquarters and the 12th Marine Regiment to which we were assigned. We had been located there for eight months by this time and we were settled in for the most part. Early in the month we sent a platoon of Guns (2) up to a place called Gia Le, which was very close to the position we had been in most of the previous summer, to support an operation called “Operation Cumberland”. We moved the platoon several times over the summer in support of that operation. The battery got a new CO that month. His name was Harry Baig. Harry was a very unusual character who turned out to be quite an enigma (see here for more info). To most of us he was just a “gung ho” wacko.

Kiser and I spent a day in Hawaii today, gearing up for our trek to Danang tomorrow. So far all has gone well and our next entry should be from Danang.

In December of 1965 I had just got back to the states from Cuba. It was good to be back in Camp Lejeune after 6 months of the heat, humidity, iguana’s, and enormous rats in Guantanamo Bay but something had changed in Camp Lejeune since we had left six months earlier. I soon learned that the difference was that a lot of people were getting orders to WestPAC and that almost invariably meant that they were headed for Vietnam. Like most of the guys, I had never heard of Vietnam until we were in Cuba. Marines had recently landed in Danang and we were hearing stories about combat breaking out. Little did we know that within two years there would be almost a half a million men there and that most of us would be included in that number.

Once I got the orders to go, the first thing I had to do was to report to sick bay to get some shots. I remember getting something called gamma globulin – a lot of it. I still to this day don’t know what gamma globulin was for but the Marine Corps seemed to be in love with it. The standard dose was one cc per ten pounds of body weight. Since I weighed about 200 pounds in those days I got 20cc’s, 10ccs in each cheek. 10cc’s is a big shot and I remember having trouble sitting for a while after getting the shots. At least they gave me an equal amount in each cheek so I wasn’t lopsided.

I went back to Boston on leave, spent some time with Janet and my family, and in mid-January of 1966 I headed for Camp Pendleton in California. Guess what was the first thing I got when I reported for duty in Camp Pendleton? You guessed it – 20cc’s of gamma globulin. I spent 6 weeks in California training for Vietnam. The training consisted of listening to newly-returned guys telling us how we would be killed when we landed in country. Notice I said “would” be killed rather than “might” be killed. Everyone I know that went to Vietnam as part of a replacement company like I did and was trained in Camp Pendleton landed in Vietnam convinced that they had been handed a death sentence and would be dead within hours of landing “in country”. The training also consisted of spending hours marching up and down the hilly terrain of the California coast in February, when it gets pretty chilly, preparing to go to a tropical country where I spent most of my time less than 20 meters above sea level.

Sometime during my “training” someone decided that I wasn’t old enough to go to Vietnam and get killed (I hadn’t turned 19 when I got to California) and they assigned me to another replacement company that was scheduled to ship out a few weeks later than the company I had trained with. Guess what was the first thing on the agenda for this new company? You guessed it – gamma globulin. So I got another 20cc’s. I won’t drag this story out any longer but I’ll simply tell you that when we got to Okinawa we all got another dose of gamma globulin.

When I got to Vietnam I was assigned to an artillery unit, which I expected because I was an Artilleryman. This unit had just landed in Vietnam a few days before. Actually they had spent the time I was running up and down the hills in California sitting on a ship heading for Vietnam. I ended up spending 19 months and 22 days with that outfit, 1st 155mm Guns, and I spent all of that time with four other guys.

Tomorrow I will leave Honolulu with one of those four guys. His name is James Kiser but for some reason we all called him Clyde. I learned a few years ago that Clyde is actually his middle name. So here we go, over 51 years after we first met, and together we will retrace our steps from Danang to Phu Bai and points north. I am going to try to post an entry in this blog every day we are in country. Welcome aboard.