Shortly after I got assigned to 1st Guns in March 1966 I was selected to stand watch in a hole on our perimeter wire. I was a “newbie” but I was surrounded by “newbies” because, while I had been in country for only a few days, the entire battery had only been in country a few days longer than me. The position I was in was set up as a machine gun position. The hole itself was shaped like a “U” with the machine gun on the ground between the legs of the “U”. It was sandbagged on the top and on all sides with a small slit in the front and an opening in the rear to allow us to get in and out.

I was assigned there with another guy from the FDC (Fire Direction Center). He said he was from California but he had a decided twang in his speech that said he had originated somewhere in Appalachia. We were expected to stand watch all night so we were not assigned any chores during the day and we took turns dozing and generally just farting around. My hole-mate decided to take a nap and he laid down on his back on a cot we had in the hole with us that took up much of the available space. He pulled a mosquito net over him and fell fast asleep. I sat in the hole wondering how I was going to die that night because all my ‘training’ in California convinced me that having been in country for a week or so I was on borrowed time.

Shortly I caught something moving in the hole out of the corner of my eye. When I finally saw it I just about came unglued! There, coiled on top of the mosquito netting on this guy’s chest, was a little green snake that was about a foot long. Now in my training in Camp Pendleton I had been told that there were some very dangerous snakes in Vietnam. One in particular was considered very dangerous. It was small and green and it was called a Bamboo Viper. It was considered very deadly. They told us the natives called it a “two-stepper” because you would only be expected to survive long enough to take two steps before you died if it bit you. In fact I don’t know if it had to bite you. I think it just had to look at you according to the training. Anyway here I was locked in a hole with the most deadly snake in the world and I had no way out!

I grabbed my rifle and chambered a round. When I did that it woke up my hole-mate and he moved, which agitated the snake. I leveled my rifle at the snake, which was sitting on this guy’s chest, and I decided if it made one tiny move towards me I would shoot it regardless of the fact that it would certainly  put a good sized hole in my partner in the process of killing the snake.

The guy, who I had only known for a few days at that time, looked at me carefully, sized up the situation, and said to me in a very steady voice, “Don’t even think about it!” The snake took off and I ejected the round from the chamber of my rifle. I never slept a wink for the rest of the time I was on watch in that hole.

Well, I have to tell you that I’m very happy I didn’t shoot that snake that day back in 1966 because I just spent close to three weeks with that guy I was in the hole with. We had a great trip and learned that after 51 years we still enjoy each other’s company. 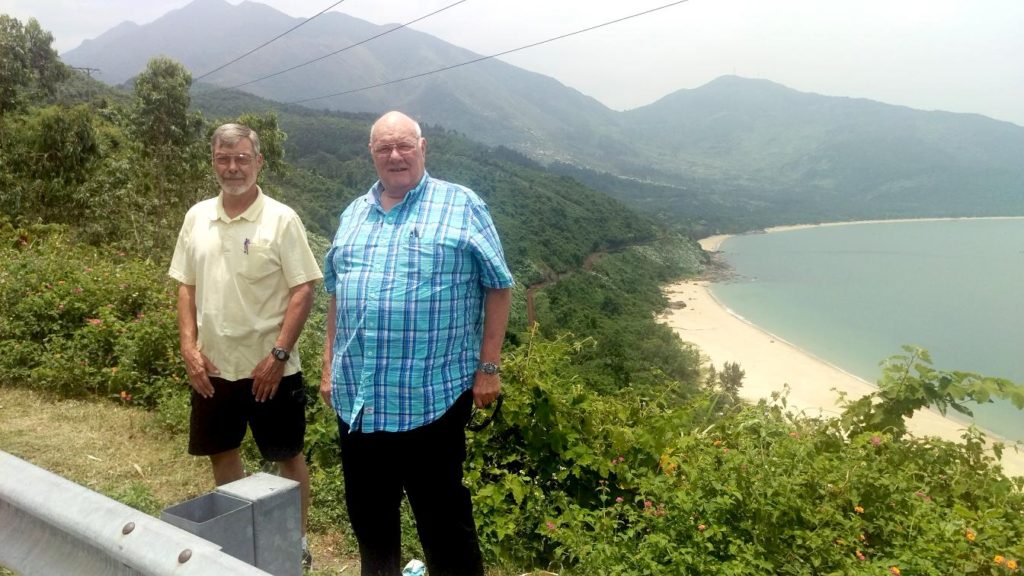 Today’s adventure was a trip to the downtown shopping area of the city. We had a cabbie take us downtown and drop us off on one of the shopping streets downtown and we walked for a while. It was interesting but not particularly exciting. After walking a while we stopped and had some coffee. 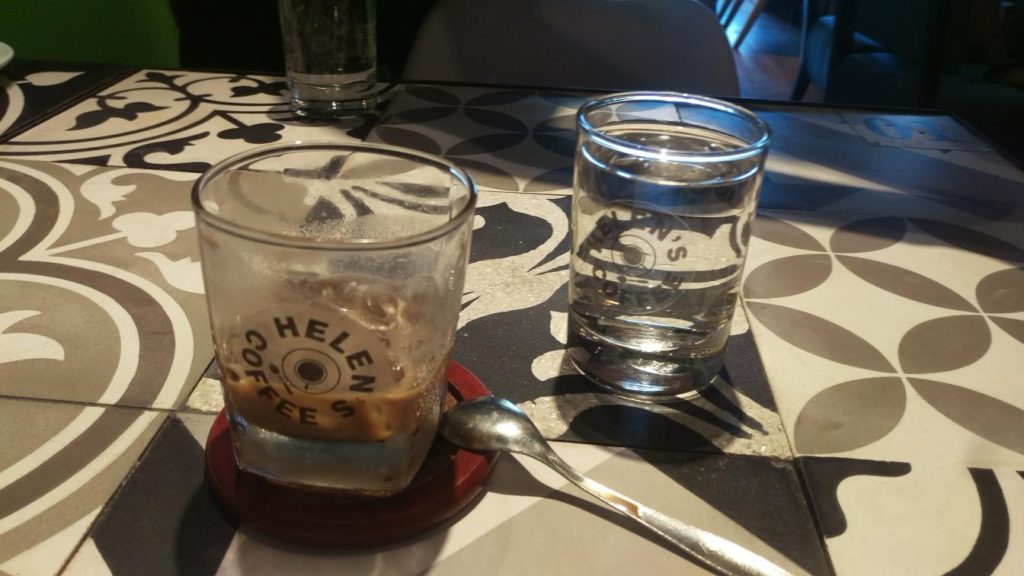 Then we walked down to a big Vietnamese market called Han Market on the banks of the Han River. Unfortunately we walked into the building at the food section of the market and the place was redolent with the smell associated with dried fish and a lot of very fresh fish on display. I did end up buying some peanuts. I have always liked the peanuts in Malaysia and I assumed these would be similar. They roast the peanuts longer there than they do in the states and they come out very crunchy. I was very proud of myself because I got exactly what I wanted and I bargained successfully to get the price down to what I was willing to pay.

As we made our way down the river, we found a place to grab a bite to eat and then we headed back to the hotel, but not before we got a cab to take us over the Dragon Bridge.

Jim has had a thing about driving over this bridge and for some reason the cabbies all avoid it. This time we had a plan. We would walk down the riverfront until we got to the street that crossed the bridge and hail our cab there. We made our way down the river in the 85°/125% relative humidity and got our cab. All the guy had to do was drive straight ahead and cross the river. I laughed my ass of as he turned right and drove down the near side of the river and took the next bridge. In the end Jim never got to ride over the damned bridge.

This trip has confirmed my love of Vietnamese coffee. It is stronger than espresso and they drink it sweet, either using sugar or evaporated milk to sweeten it. The other thing I learned on this trip is that drinking or eating hot soup or coffee in hot weather does not cause any discomfort. It was about as hot and muggy as it can get in Danang today but eating Pho didn’t make it any worse.

We had breakfast before we set out. The breakfast buffet is very good. 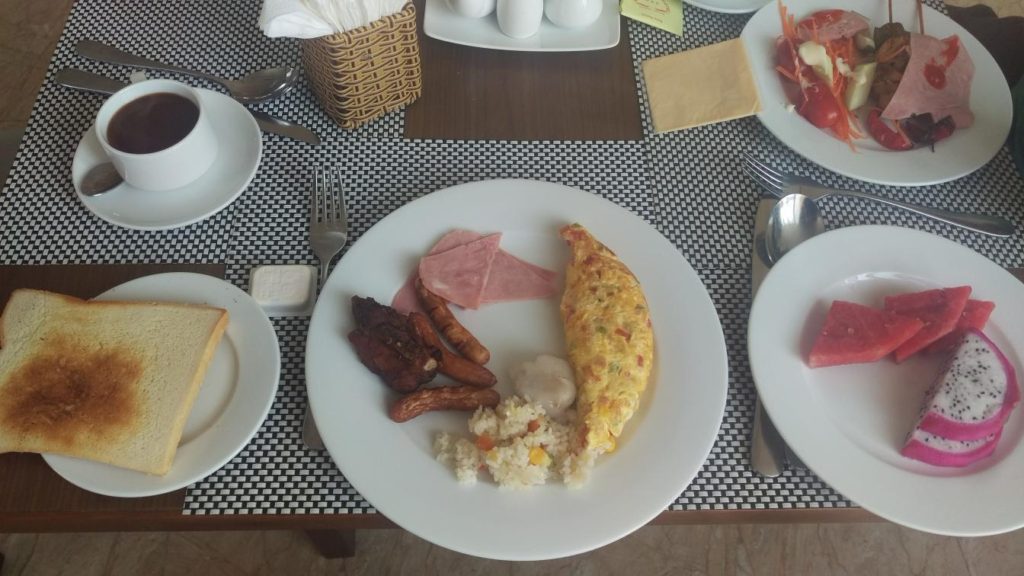 Breakfast at the Sea Phoenix

The last time I was in Danang (2011) I stayed at the Furama Beach Resort, which is right across the street from the Sea Phoenix Hotel we are using on this trip. Today we decided to venture across the street to see how the other half lives. We stopped and had a drink while checking out the views of China Beach and it was pleasant.

Incidentally, they discourage calling the beach “China Beach”, probably because that’s what we called it. They are very ambivalent about using overt references to, what they call the “American War”. If it suites their purpose, such as to advertise a tourist attraction like Khe Sanh or the Chu Chi tunnels, they are fine with it but otherwise they emphasize the Vietnamese names. I have seen several places where the “American War” was characterized as a war America waged to colonize Vietnam. That’s their story and they’re sticking to it. I’ve always seen it as a clumsy attempt on our part to influence the outcome of a civil war.

Our next order of business was to stop at a shopping Mall down the street from our hotel to pick up a few things. Jim wanted some tonic water and I wanted to buy some Vietnamese coffee. We got both but it did feel strange walking around a supermarket in Vietnam a few miles from where we were running patrols and taking incoming fire 50 years before.